In the Mahaparinirvana sutra, the Buddha tells his followers that they can attain merit and a noble rebirth by going on pilgrimage to the places where he was born (Lumbini), gained enlightenment (Bodhgaya), first taught (Sarnath), and attained Nirvana (Kushinagar).

The Buddhist tourist train takes you to these places and helps you experience firsthand the self disciplined and legendary life of Lord Buddha.

India, the country where Buddhism originated has rich memories of the Buddhist legacy. As part of its drive towards austerity, the only kind of art and architecture that it supported were Stupas (stone cased moulds that commemorated relics of Buddha), Chaityas (prayer halls) and Viharas (cells for the monks). Buddhist Train India will help you visit all these places up close for a truly religious experience.

Come, discover the path to enlightenment, towards Buddha by train.

Exclusive Train for the Buddhist Circuit Tour : The Buddhist Circuit Special Train is an exclusive air conditioned train for Buddhist circuit destinations and does not carry passenger other than the tourist booked with us for this special tour.

Private Security Guards in each coach for constant & close watch to ensure safety of the passengers.

The passengers can choose from an assortment of sumptuous hot meals (Veg / Non Veg), snacks and cold drinks. Packaged drinking water, tea and coffee are also available to the passengers in ample quantity.

Convenience of the passengers, clean and hygienic lavatories and showers are provide.
Accommodation in comfortable Hotels of the Buddhist Circuit

All passengers are provided with Travel Insurance Cover for the duration of the tour.

In case of any exigency, medical support can be provided through an extensive network of Indian Railways medical facilities.

On sufficient advance information, tour guides of various languages would be provided for sizeable groups.

Tourists are requested to obtain a proper Visa for visiting Lumbini (Nepal) before arriving in India. However, we can provides assistance in obtaining Visa at the time of entry in Nepal as per extant rules. 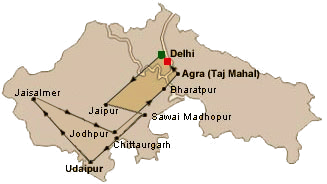 Passenger who would like to have Single occupancy i.e. do not wish to share the room with anyone else should choose the option at the time of booking by paying additional amount of US$ 50 per night or US$ 200 for the full tour.

Notes - : Single Occupancy is not be applicable for Train journey.

Package price does not Include : -

The Cut-off (end of IRCTC services) and Reporting Time (commencement of IRCTC services) for the tourist availing partial journey (less than 7 nights) on the Buddhist Circuit Special Train would be 1900 Hrs at Railway station / Hotel. Tourists who wish to join group before 1900 Hrs or extend the tour beyond 1900 Hrs have to pay the charges for an additional night over and above the total number of nights opted for.

Gaya derives its name from the mythological demon Gayasur (which literally means Gaya the holy demon), demon (asur, a Sanskrit word) and Gaya. Lord Vishnu killed Gayasur, the holy demon by using the pressure of his foot over him. This incident transformed Gayasur into the series of rocky hills that make up the landscape of the Gaya city. Gaya was so holy that he had the power to absolve the sins of those who touched him or looked at him; after his death many people have flocked to Gaya to perform shraddha sacrifices on his body to absolve the sins of their ancestors. The most popular temple today is Vishnupad Temple, a place along the Falgu River, marked by a footprint of Vishnu incised into a block of basalt that marks the act of Lord Vishnu subduing Gayasur by placing his foot on Gayasurs chest. Buddhist Highlights tradition regards the footstep in the Vishnupad Temple as a footstep of Buddha. For Buddhist Highlights, Gaya is an important pilgrimage place because it was at Brahmayoni hill that Buddha preached the Fire Sermon (Adittapariyaya Sutta) to one thousand former fire-worshipping ascetics, who all became enlightened while listening to this discourse. At that time, the hill was called Gayasisa.

According to Buddhist traditions, 500 BC Prince Gautama Siddhartha, wandering as a monk, reached the sylvan banks of Falgu River, near the city of Gaya. There he sat in meditation under a bodhi tree. After three days and three nights of meditation, Siddhartha attained enlightenment and insight, and the answers that he had sought. He then spent seven weeks at seven different spots in the vicinity meditating and considering his experience. After seven weeks, he traveled to Sarnath, where he began teaching Buddhist Highlights.

Disciples of Gautama Siddhartha began to visit the place where he had gained enlightenment during the full moon in the month of Vaisakh (April-May), as per the Hindu calendar. Over time, the place became known asBodhgaya, the day of enlightenment as Buddha Purnima, and the tree as the Bodhi Tree.

As the place of the Buddhas Enlightenment, Bodhgaya is the spiritual home of Buddhist Highlights. Located in Bihar, 115 kms from Patna, the land is rich and fertile, dotted with green fields and watered by the river Phalgu - the same ancient Nairanjana River where the Buddha bathed after attaining enlightenment. A range of low forested hills silhouette the small hamlets flanking the glistening, sandy banks of the river. Monks and nuns rub shoulders with tourists and believers from all over the world. An all-pervading calm envelops the town, giving visitors a sense of peace.

The meandering river Banganga and five hills ensconce picturesque Rajgir, ancient Rajgriha (literally, the abode of kings). During the lifetime of the Buddha this was the capital of the powerful Magadhan kingdom, ruled by the virtuous king Bimbisara. Like many others in search of Truth, Prince Siddhartha, after he renounced his royal heritage came to this city to seek the path of salvation. Later, he overwhelmed the citizens of Rajagriha with his serenity and grace and converted King Bimbisara of Magadha and countless others to his religion. The hills and caves surrounding Rajagriha were home to spiritual teachers, ranging from the materialism of the early Charavaka School to the metaphysics of Upanishadic philosophers. In fact the first Buddhist council after the Buddha was hosted here at the Saptaparni caves. It was Rajgir which saw Gautam Buddha spending several months meditating, and preaching at Griddhkuta, ('Hill of the Vultures'). He also delivered some of his famous sermons. The rich merchant community here soon became the Buddhas followers and built many structures of typical Buddhist Highlights architecture.

Nalanda - the most renowned university in ancient India derived its name from Na-alam-da, meaning Insatiable in Giving, one of the names by which the Lord Buddha was known. Nalanda was one of the worlds first residential universities, i.e., it had dormitories for students. In its heyday it accommodated over 10,000 students and 2,000 teachers. The university was considered an architectural masterpiece, and was marked by a lofty wall and one gate. The subjects taught at Nalanda University covered every field of learning, and it attracted pupils and scholars from Korea, Japan, China, Tibet, Indonesia, Persia and Turkey.

The Buddha is mentioned as having several times stayed at Nalanda. When he visited Nalanda he would usually reside in Pavarikas mango grove, and while there he had discussions with Upali-Gahapati and Dighatapassi[, with Kevatta, and also several conversations with Asibandhakaputta. The Buddha visited Nalanda during his last tour through Magadha, and it was there that Sariputta uttered his "lions roar, affirming his faith in the Buddha, shortly before his death. Also, Nalanda was the residence of Sonnadinna. Mahavira is several times mentioned as staying at Nalanda, which was evidently a centre of activity of the Jains.

The city of Varanasi is situated along the west bank of the Ganges in the north Indian state of Uttar Pradesh. Called Benaras by the British, Varanasi is a holy city in Hinduism, being one of the most sacred pilgrimage places for Hindus of all denominations. More than 1,000,000 pilgrims visit the city each year. The city finds mention in the great epics of Mahabharata and Ramayana. The renowned American novelist Mark Twain once wrote, " Benaras is older than history, older than tradition, older even than legend and looks twice as old as all of them put together." It has the holy shrine of Lord Kashi Vishwanath (a manifestation of Lord Shiva), and also one of the twelve revered Jyotirlingas of Lord Shiva. According to mythology, Lord Shiva once in fact lived in Kashi ( Varanasi ). Hindus believe that bathing in Ganga remits sins and that dying in Kashi ensures release of a persons soul from the cycle of its transmigrations.

Varanasi is one of the holiest places in Buddhism too. It was believed that over twenty-five centuries ago, a sage travelled 200 kms from Bodhgaya, where he had attained Nirvana to reach the ghats of Varanasi of Kashi as it was then called. The city had seen saffron clad spiritual teachers before him, who came here, drawn by its magnetic, inexplicable spiritual power. The Sage was looking for five Hindu ascetics, old companions from whom he had parted, because they had insisted that the only path to salvation was through self-mortification. The Buddha found them at Rishipattana, the Deer park near Kashi, and gave them the gift of the spiritual knowledge which he had attained since he parted with them, and they became his first followers, and the first members of the Sangha.

Sarnath is located 13 kilometres north-east of Varanasi, in Uttar Pradesh, India . It Sarnath (also Mrigadava, Migadaya, Rishipattana, Isipatana) is the deer park where Gautama Buddha first taught the Dharma, and where the Buddhist Sangha came into existence through the enlightenment of Kondanna. Gautama Buddha started teaching not to debate but for the advantage of and out of compassion for human beings. He explained the middle way which avoids extremes, the Four Noble Truths, and prescribed the Eight-fold path.

There are remains dating as far back as the 3rd century B.C. when Emperor Ashoka founded various institutions, stupas, monasteries and pillar edicts. The runs at Sarnath and the art collection in the Archaeological Museum are representations/ examples of the glorious past of Sarnath. Archaeological remains are open from Sunrise to Sunset.

Gorakhpur is a city in the eastern part of the state of Uttar Pradesh in India, near the border with Nepal. It is the administrative headquarters of Gorakhpur District and Gorakhpur Division. Gorakhpur is famous as a religious centre: the city was home to Buddhist, Hindu, Jain and Sikh saints and is named after the medieval saint Gorakshanath. The city is also home to many historic Buddhist Highlights.

Gautama Buddha, founder of Buddhism, renounced his princely clothing at the confluence of the rivers Rapti and Rohini, near Gorakhpur , before setting out on his quest of truth in 600 BC. The city is also associated with the travels of Lord Buddhas contemporary Lord Mahavira, the 24th Tirthankara of Jainism.

kushinagar - At this location, near the Hiranyavati River, Gautama Buddha attained Parinirvana (or Final Nirvana) after falling ill from eating a meal of a species of mushroom. It is said that the Buddha had three reasons for coming to Kusinárá to die:

1. Because it was the proper venue for the preaching of the Mahá-Sudassana Sutta;

2. Because Subhadda would visit him there and, after listening to his sermon, would develop meditation and become an arahant while the Buddha was still alive; and

3. Because the brahman Doha would be there, after the Buddhist Highlights Tour death, to solve the problem of the distribution of his relics.As the scene of his death, Kusinara became one of the four holy places declared by the Buddha (in the Mahaparinibbana Sutta) to be fit places of pilgrimage for the pious, the other three being Kapilavatthu, Buddhagaya and Isipatana.

All the above dates are on Saturdays.
Charter trips also available on request. 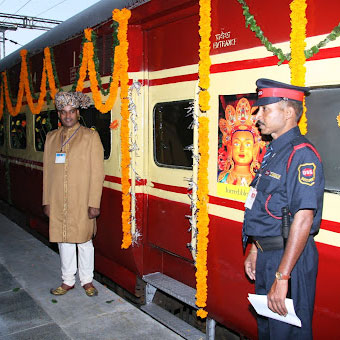 To satisfy the queries of our clients is our topmost concern. If you want us to call you back, please, leave your phone number, your name and the convenient time to call you. Our customer care executive will call you back as soon as possible. 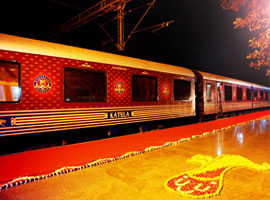 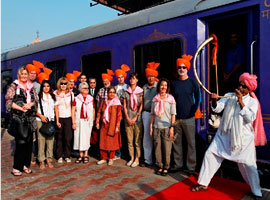 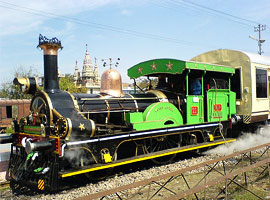 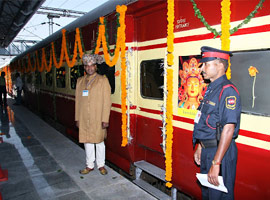 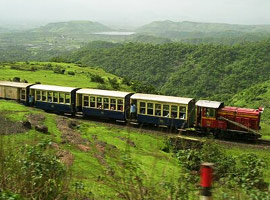 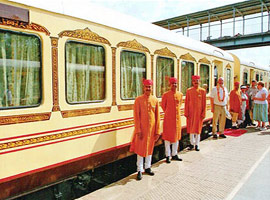